On Tuesday I was sitting in the beautiful Ballroom of the Grand America Hotel in Salt Lake City surrounded by some of my amazing executive and management team members. The purpose of our attending this very classy event was that my company, BKA Content, had won a spot in Utah’s Top 100 fastest growing companies that MountainWest Capital Network awards each year. 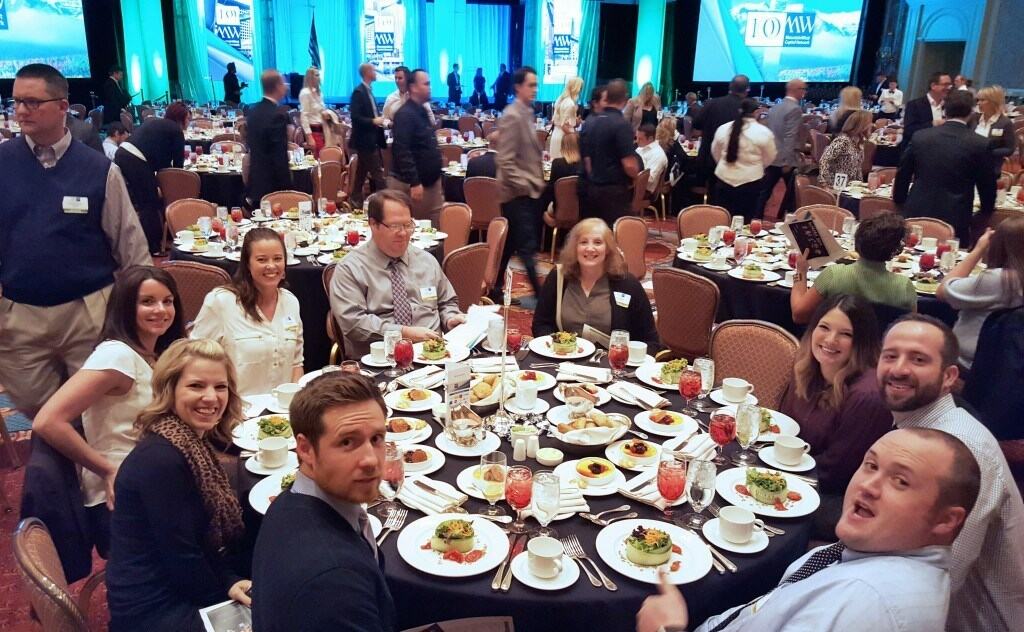 Having never attended this awards ceremony before, I really didn’t know what to expect, nor did I realize how prestigious this recognition really was, but all of that became crystal clear as the awards ceremony started.

Utah Governor, Gary Herbert, started off the event with a speech congratulating all those in attendance on their success.

“This prestigious award, presented by MountainWest Captial Network, is a well-earned public recognition of the entrepreneurial skill, audacity, determination and-if I may add-a bit of luck it takes to build a successful business.” – Governor Gary Herbert

The next hour of the ceremony was the actual presentation of the awards, with the presenters starting at #100 and moving toward the #1 fastest growing company in Utah.

Before the awards started, everyone on my team guessed what number our company would be. I gave an optimistic #60, but in my heart I thought for sure we would be in the 80’s or 90’s since we are such a young company and had never been recognized before.

I could not have been more wrong! As the countdown passed the 80’s, 70’s, and into the 50’s, my heart was pounding as we had not been announced! The excitement was building and you could really start seeing the sense of disbelief and surprise from everyone at our table.

The 40’s, 30’s and even 20’s went by and my disbelief turned into total shock as an event volunteer came and asked me to line up for the next set of awards.

Then the moment of reality hit.

Number 16?! Not in my wildest dreams would I have pegged us at that number. As I shook the hands of the event chairmen and accepted the award, I was truly filled with a sense of pride and accomplishment of what BKA Content has accomplished since we started.

In that instant, a flood of memories hit me. The memory of our Co-Founder Matt Secrist calling me in the spring of 2010 and telling me that I needed to quit my full-time job because BKA Content was growing faster than he expected. The memory of us hiring our very first account manager. The memories of attending our very first tradeshow, landing a large client, and hiring our first writers. Needless to say, I had the clear sense of reality that a lot has happened since the “little blog that could” started in 2010 to bring us to this point.

Now that the event has transpired and I’ve had a day or two to really let it sink in and reflect, I want to give a heartfelt thanks to all who made this possible.

It’s no secret that without clients, you can’t stay in business. It has been one of my greatest pleasures to get to know, meet and shake hands with several of our clients over the years. All of our clients are awesome and have helped BKA achieve this special recognition. To you we are eternally grateful.

I am especially grateful for the trust we received when we were a much younger company and to those clients who were willing to give us a chance. We appreciate all of our client’s patronage and continued business and will continue to strive to provide them with the best writing services we can offer. 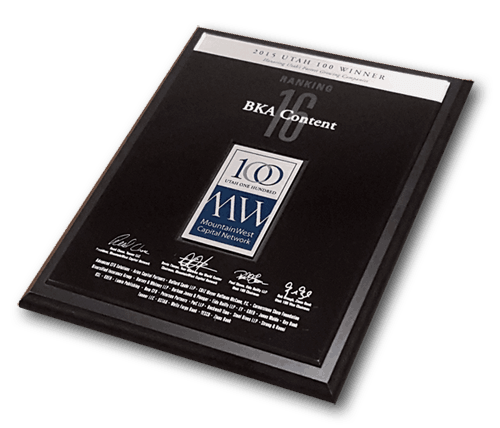 Phil Secrist, Jon Bingham, Cara Secrist and Drew Allen have poured their hearts and souls into BKA since they were brought on board. Their vision, determination and work ethic benefits BKA Content every single day. What I appreciate most about these incredible people is their sense of loyalty. They genuinely care about the company and all those who work within it and strive to better it every single day.

Melinda Rhodes, Katie Price, Andra Stowe, Claudia Culmone, Amber Morris, and Shelly Peterson help to ensure that our day-to-day operations go off without a hitch. These women are all incredible at what they do and I appreciate how much they love the company and advocate for the writers and our clients. I marvel at their ability to create genuine relationships with those we do business with as well as with our writers to spur effective communication, high-quality work, and ultimately an amazing company culture.

While there are too many for me to name individually, I want them all to know that BKA Content doesn’t work without them. They are the life-blood of the company and their talents have created the necessary demand for our services in order for us to stay in business.

Our writers are truly the engine of BKA Content, and it’s been a pleasure to get to know them and see this team continually grow. I really do appreciate every single individual who currently writes, or has ever written for BKA and genuinely thank them for all that they have done for me and our company. I look forward to the future with excitement to see what they can help us to accomplish in the years to come. 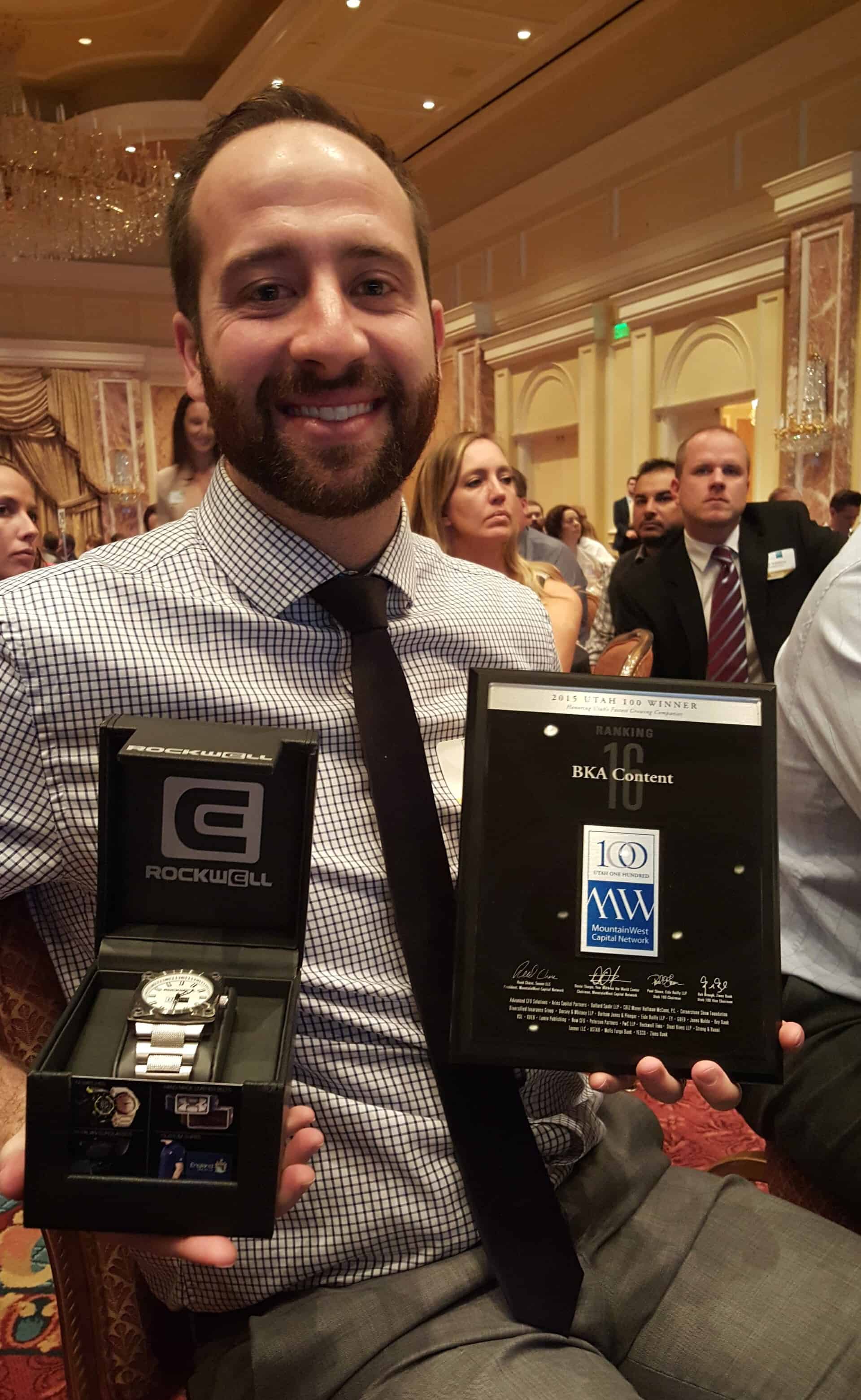 Last but not least, I want to take a second to thank the guy who made all of this possible, our Co-Founder Matt Secrist.

While I may have had the initial idea for BKA Content, Matt is the one who started writing all of the content initially, and got the idea off the ground to create a fully functioning company.

Without his vision and hard work in those early stages, I would not be writing this tribute right now. Matt is stubbornly loyal, incredibly positive, and cares deeply about our employees and the company culture we have here at BKA.

While I’ll always love him as my brother, I really do appreciate all that he does as a leader of the company and am excited to see where his hard work, and the hard work of those at our company, take us in the years to come.

My most sincere congratulations to all those who are a part of BKA Content on being the 16th fastest growing company in Utah. You’ve truly earned it!