What Is A Hyperbole? 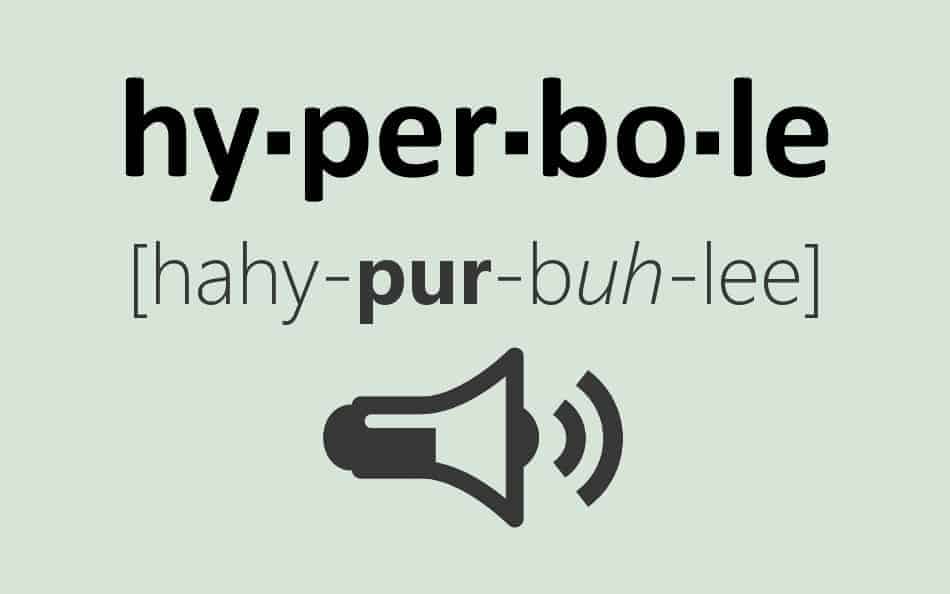 What Is A Hyperbole?

Have you ever used “LOL” when responding to a text or message? If so, you have used a hyperbole without even realizing it. In fact, it’s part of our culture to use hyperboles all the time. Let’s get into the meat of what exactly a hyperbole is.

Hyperboles Are for Emphasis

What is a hyperbole? A hyperbole is an exaggeration or overstatement used figuratively to emphasize a point or idea.

– After a long day of walking, my feet were killing me.

The writer here does not literally mean that his feet were actively causing him to die. He merely means that his feet ached from all the walking he did. He could simply have said as much, but the hyperbole more colorfully conveys his feeling of agony.

– She shot me a glare so icy that I had to turn on the heater.

– I must have aged a couple of decades over the course of that webinar.

– I will love you until the end of time.

In creative writing, an effective hyperbole embellishes the storytelling in a way that grabs the reader’s attention. The illustrative wording should seize the imagination with images or sensations that are obviously exaggerated yet emotionally stirring.

Note that the intention must never be to deceive. It should always be clear to the reader that your hyperbole is not to be taken literally. This may entail overstating to such a degree that the exaggeration becomes overtly absurd, which is why hyperboles are most often used for comic effect.

Hyperboles are abundant in marketing, but the separation between hyperbolic puffery and false advertising can be a fine line, sometimes requiring a court’s judgment to discern. If you make an unsubstantiated claim about something that should be objectively verifiable, this could be grounds for legal action. For example, marketing a suitcase as being so durable as to be able to survive a fall from the top of the Eiffel Tower could be ruled false advertising if the claim can be easily shown to be factually inaccurate.

Rules and regulations should not be your only consideration. Reliance on unverifiable subjective statements may not land you in legal trouble, but it may nevertheless prove counterproductive. If your ad copy consists only of broad superlative claims (e.g. “We’re the best!”) backed by no supporting data, savvy customers will see through the gimmicky language and question your credibility.

In other professional contexts, hyperboles are best used sparingly. The more formal the piece, the less appropriate hyperboles are. Scholarly articles and technical writing, which demands clarity and precision, should not include any. Even in less formal writing, exercise moderation. A hyperbole must stand out to be effective. If you overstate every point, readers may become desensitized to your exaggerations, and they will no longer know when to take seriously anything you say.

Henry Fung is a freelance writer and blogger. When he is not earning his paycheck, he enjoys online debates over orthography and typography. He is much more mellow in person.

← Commonly Confused Words: Into Vs. In To 40 Popular Idioms And Their Meanings →