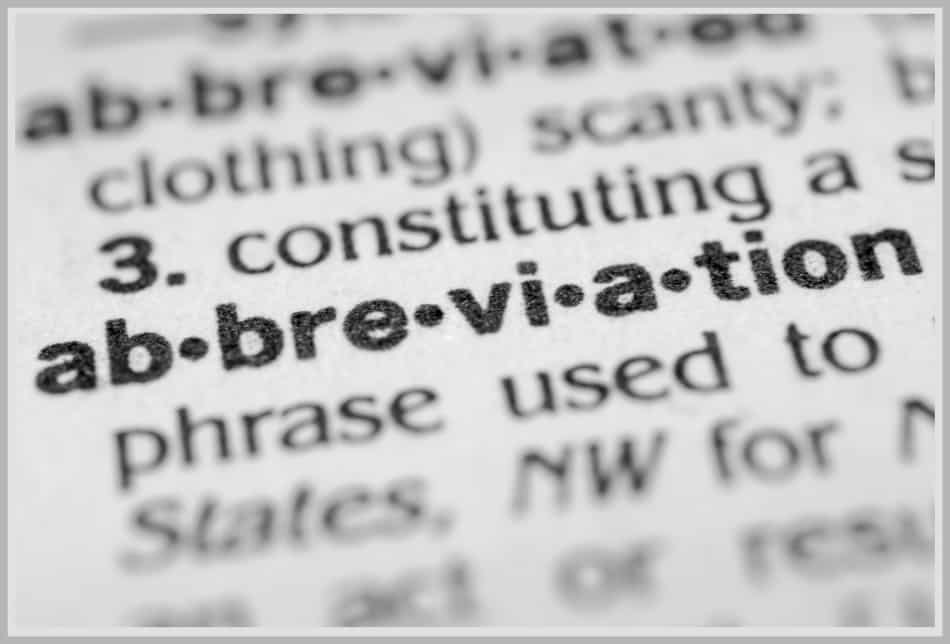 I’m a huge fan of abbreviations because they make communication easier and spare me from unnecessary typing. When I’m writing in Associated Press style, though, it sometimes feels like these benefits disappear, since there are so many tricky AP style rules for abbreviations to remember (and occasionally Google, if we’re being honest). To take some of the frustration out of using AP style abbreviations, today I’d like to break down the seemingly endless list of rules that most writers need to know.

When you’re working with AP style numbers, times or dates, it’s acceptable to use several standard abbreviations. These abbreviations, which include a.m., p.m., B.C., A.D. and No., are so widely known and used that you never need to write them out fully. When you’re listing dates, you also should abbreviate months that have more than five letters.

– He was horrified to realize he had stayed up until 4 a.m. watching documentaries about life in A.D. 1200.

– She was scheduled to begin work on Oct. 31, which only increased her concerns about choosing the wrong outfit for her first day.

– His birthday falling on Apr. 1 had exposed him to years of terrible jokes and pranks.

When you’re referring to a numbered address, you can abbreviate ordinal directions and words such as boulevard and avenue. Otherwise, stay away from these abbreviations.

– She finally stopped forgetting her address when she moved to 4000 5th St., Unit 6.

– Thanks to the directions from their navigationally challenged friend, they spent an hour walking up and down E. 40th St. looking for a cross street that didn’t exist.

When the name of a state appears after a town, city or military base, it generally must be abbreviated. The AP Stylebook makes exceptions for non-contiguous states and for states with names that are five letters long or less. This sounds pretty straightforward for an AP style rule, but remember that the AP style abbreviations for states aren’t the same as the state postal codes. Avoid using these codes unless you’re giving an address.

– They were woefully unprepared for two feet of snow to fall during what was supposed to be a pleasant late spring visit to Denver, Colo.

– Their reluctance to leave Fairbanks, Alaska, at the end of the trip stemmed partly from the terrifying nature of their turbulent flight into the city.

When you’re writing in AP style, you should abbreviate titles that precede names and suffixes that fall afterward. Common examples of these include Mr., Mrs., Dr., Sr. and Jr. You also can abbreviate words such as company and corporation when they appear after the name of a business entity.

– Their neighbor, Dr. Gray, was less than amused about their newly licensed teen driver’s run-in with his fence.

The rules for abbreviating the names of organizations depend on the context. If an abbreviation is well-known, you can use it the first time that you refer to the organization. Otherwise, wait and use it on the second mention, if at all.

– To date, three of their neighbors had made less-than-original references to FBI surveillance vans in their Wi-Fi network names.

– To date, three of their neighbors had made less-than-original references to Federal Bureau of Investigation (FBI) surveillance vans …

Other Rules for Abbreviations

The first letter of most abbreviations should be capitalized, but the rules for punctuation are more varied. If an abbreviation consists of several letters, you generally don’t need to place periods between the letters. However, if an abbreviation is composed of just two letters, you should include the periods. Of course, since we’re talking about AP style, there are some exceptions to the latter rule, including AP, EU and GI.

– After returning from the EU, she found the dull coloring of U.S. currency extremely disappointing.

Finally, when you’re deciding whether to use an abbreviation, it’s important to take context into account. In technical writing and tabulations, incorporating more abbreviations is often acceptable. In other forms of professional writing, abbreviations should only be used as noted above. Avoid using them as shorthand, and leave them out of headlines whenever possible.

– By some miracle, the children were only 20 min. late for their early a.m. appointment with the Dr.

Learning all of these AP style rules for abbreviations can be tough, so there’s no shame in bookmarking a style guide that you trust and checking it when in doubt. Do you have any memory tricks or other pointers for keeping all of these conventions straight? I would love to hear from you in the comments section! Click here if you’d like to freshen up on some more AP Style rules.

Latest posts by Marissa Metcalf (see all)
← It's Not That Simple: The Difficulties of Scaling Content Marketing Creating Branded Content to Tell Your Company's Story →