How To Tell if a Blog Is Written by a Bot

In 2020, State Farm ran an ad featuring a newscaster — seemingly from the 90s — making uncanny predictions about the future. The apparent display of prescience alarmed many people. Many were even more alarmed when they learned it was fake. Indeed, the video footage in the ad was the result of artificial intelligence. This ad is just one example of the increasing ubiquity of AI and how easily it can go unnoticed. Advertising isn’t the only domain that AI has begun to infiltrate, though. If you’ve heard about the advent of AI writer software, you might be wondering — will AI replace content writers? This question doesn’t have a clear answer, but you can sniff out AI-generated content by making note of the following telltale signs a bot wrote a blog.

An AI Writer Tends To Be Repetitive

One of the biggest signs that a piece of content is AI-written is repetition. A bot simply can’t reproduce the cache of knowledge that a human writer can draw on, and even when it synthesizes data from outside sources, it doesn’t have the intuition to sift through text and identify original ideas. The result is text that often contains only a few unique ideas, rephrased in perpetuity.

It’s estimated that the most advanced AI writer can only produce about 100 words on a given topic, and after that, it will either become repetitive or devolve into gibberish. According to studies, the best blog length for SEO purposes should be at least 2,100 words, so it’s unlikely that the current generation of writing bots will be able to compose long-form articles that pass for a human writer.

This is a problem for any brand that relies on blogs as part of its marketing strategy. Blogs that contain engaging, original content will draw readers in and boost traffic to your site. Conversely, blogs that are repetitive and contain scarce new information will do few favors for your site. Even if an AI writer appears to save money, it’s worth questioning whether it offers the same value that a human writer would.

Another major sign that a blog has been AI-generated is the level of analysis contained in the content. An AI writer can easily recite facts and compose simple sentences, but it does not possess the analytical skills necessary to extrapolate meaning from those facts. If you’re reading a blog with in-depth commentary, it’s highly unlikely that a bot wrote it.

A piece that almost exclusively contains facts and simple statements, however, could be bot-generated. Writer bots work by mimicking the structure of content that’s written by humans. As much as AI may try to replicate the structure of an analysis, it can’t replicate the actual insights that a human writer can generate. Instead, it will likely become nonsense, or it will simply revert to the aforementioned pattern — repetition.

AI that writes for you may be able to rephrase analyses from other sources, though. One of the main functions of an AI writer is to regurgitate text that’s found from another source, and if the text in question features analytical commentary, an AI may be able to incorporate some of its ideas into a blog. This kind of writing still lacks the originality, though, that readers are typically looking for.

No Clear Tone or Voice Shines Through

Iconic writers like Steven King are famous for the unique voice that emerges from their text. Voice is the personality and personal touch that makes a blog engaging. AI that writes for you can certainly mimic this characteristic, but it hasn’t yet mastered it. When reading a blog written by a bot, for example, you might notice odd attempts at a colloquialism that don’t quite land.

Similarly, you might notice that there’s no clear tone to the blog. Is the writer attempting to persuade you or share information? Are they writing in a formal tone or a laid-back style? If you’re reading a blog and can’t easily answer these questions, there’s a chance that an AI writer is responsible. AI-generated content generally lacks a clear tone or author’s voice because it relies on mimicking structures — but can’t mimic ideas.

If you’re looking for content that will help you solidify your brand, a human writer will be uniquely able to develop a voice that’s in line with your brand values. Tone and voice are imperative to engaging with your website’s visitors, and when you’re using blogs as a marketing tool, you need to be sure that you’re investing in content that will connect with prospective customers.

Non Sequiturs Recur Throughout the Text

One of the most comedic examples of AI-generated text is a script for an Olive Garden commercial that was allegedly written by a bot. The script went viral due to its absurdity, with phrases like “unlimited stick” and “lasagna wings with extra Italy” garnering the attention of internet denizens. It’s since garnered thousands of shares across social media.

Some critics have rightfully suggested that the script was likely penned by a human — not a bot — seeking to get a few laughs. The script illuminates a major vulnerability of AI that writes for you, though — its content often falls prey to hilariously absurd non sequiturs that simply don’t make any sense. Many people believed that the script was truly generated by a bot because AI-generated content is often similarly nonsensical.

The overall coherence that an AI writer can achieve depends on the complexity of the subject it’s assigned to write about. For very simple topics, it may be able to avoid non sequiturs and remain relatively clear. For a subject that requires research or analysis, though, you are likely to end up with a blog that sounds more like a failed Olive Garden commercial than compelling content.

Its Grammar Is Deceptively Simple

One of the most interesting advancements in AI is the introduction of a bot that can detect when a bot has composed a specific body of text. The GLTR tool was created at Harvard and it can predict the likelihood that any piece of content is AI-generated. As the saying goes, it takes one to know one — but this tool operates based on a complex algorithm that’s studied millions of words written by humans and bots. Through these studies, it’s learned the key differences, and one of the biggest giveaways may surprise you — grammar.

Indeed, one of the patterns detected by GLTR is a disparity between AI and human writers’ use of hyphens, semicolons, and other unique grammatical features. Its research reveals that an AI writer will generally use simpler sentence structures and grammatical features than a human writer. This is unsurprising, given AI’s inability to replicate complex ideas and structures.

There is certainly a time and a place for simplicity, but when it comes to blogs, content that’s oversimplified can easily backfire. You want content that’s easy to understand, but that doesn’t mean it has to condescend to your readers. A human writer knows how to leverage grammar and nuance to effectively connect with an audience, and that’s an ability AI hasn’t yet mastered.

Emotion and Creativity Are Lacking

Perhaps the most important indicator of a bot-written blog is its lack of emotion and creativity. A human writer will infuse their text with feeling through the use of creative and engaging language. A bot will write sentences. Those sentences will contain information. The information may or may not be useful. It probably won’t be very engaging.

AI’s ability to replicate facial expressions is part of the reason why video deepfakes are so convincing. AI writers haven’t quite caught up to AI actors, though, and the former is rarely able to replicate the emotional subtext that a human writer is capable of creating. This is because an AI writer lacks the clear objective that a human writer can bring to a blog. Rather than writing with a clear goal in mind — and using emotion to achieve that goal — an AI is simply composing strings of words.

This fact was further confirmed by researchers from Indiana University at Bloomington. Studying translation tools that AI powers, the researchers found that AI fails to recognize the meaning of creative content — and therefore cannot mimic it. True creativity remains firmly rooted in the domain of human intelligence — not artificial intelligence.

Find Out How Human Writers Can Help You Generate Leads

Will AI replace content writers at some point in the future? It’s possible, but if so, it appears to be in the very distant future. Until then, it’s best to entrust all of your blog writing needs to a human rather than an AI writer. BKA Content’s team of dedicated writers can help you achieve your content goals, create engaging blogs, and generate more leads. If you’re ready to make marketing simpler than ever, check out our blog writing services for more information or contact us to get in touch with an onboarding specialist. 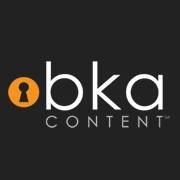 The BKA Writing Team
Writers and Editors at BKA Content
Because we believe in our system, we use our skilled writers (and editors) to create content for BKA. If you like what you see here, then you'll love the blogs you order from us!